The beginner’s guide to the circular economy

Humans are a dynamic animal—ambitious, intelligent, caring—with a baffling set of contradictory traits—destructive, myopic, careless. But when we set our minds to something, we tend to make it happen. And, we’re starting to see this with the rise of eco-conscious businesses (like B Corps!).

Sustainability is key to our survival, so we’ve got to make the shift to a system that uses environmental and societal improvements as essential measures of success and growth.

The central theme of the circular economy is not alien to us. In fact, it’s the most natural thing in the world.

Let’s imagine an elk. Fran the elk. She’s hoofing it about, munching on grasses, feeling pleasant amongst her fellow elk.

Then, a lion, fierce and hungry and named Greg, chases them about and Fran is the unlucky recipient of his sharp claws and sharp teeth and eventually, his digestive system. Ultimately, though, Greg injures his paw, can’t hunt, and curls up for his last nap.

Nothing is lost in this circle. All things go on to become other things and so on ad infinitum.

A circular economy looks at such a scenario and asks: What can we learn from the natural world? How can we remove waste? How can we preserve the intrinsic value of materials?


So, what is the circular economy? 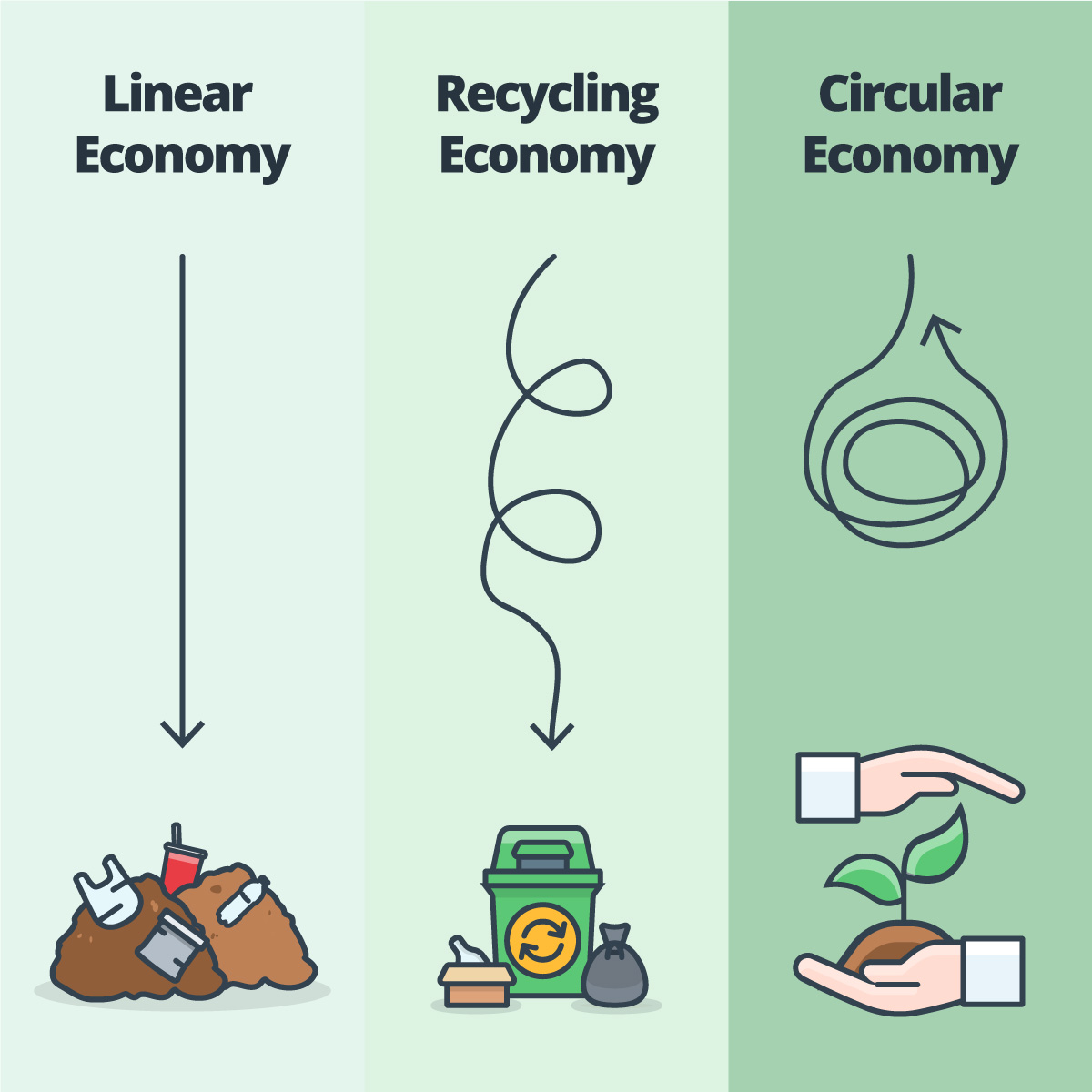 So it starts with reexamining what growth means. Instead of the myopic focus being on the upward trend of human-centric metrics, we can broaden the view and use societal and environmental benefits as a metric.

So, extracting and consuming finite resources would not symbolize growth. The same goes for taking advantage of vulnerable populations.

The economy can’t be said to be growing if streams are being polluted or habitats destroyed. By expanding the vision of an economy beyond the walls of currency and human gains, the true impacts can be evaluated.

The seed of the circular economy originates from ancient ideas around cycles and feedback, which themselves came from an observation of nature. Nature gives and takes equally, a cycle that ensures its continued existence.

There isn’t one single origin for the idea of the circular economy but rather a number of complementary schools of thought. They all aim for the same basic results though—the elimination of waste and improvement of natural systems.

Mark Esposito, Professor of Business & Economics at Grenoble School of Management and Harvard, defined it succinctly as, “a no-waste industrial chain that promotes economic growth using the least amount of non-renewable natural resources as possible.”

And, it isn’t a binary. We can all take steps to move toward this sustainable system.

Food brands can source ingredients from sustainable and local farms. Cobblers can make long-lasting and repairable footwear from renewable and biodegradable sources. Shipping companies, like Sendle, can offset their carbon emissions and invest in renewable logistics solutions (like solar-powered vans!).

Small businesses can move toward a circular economy by auditing their own sourcing and waste processes and finding ways to bend that straight line from source to waste into something more circular.

We all know the linear economy, even if we’ve never heard of it. We live in it. 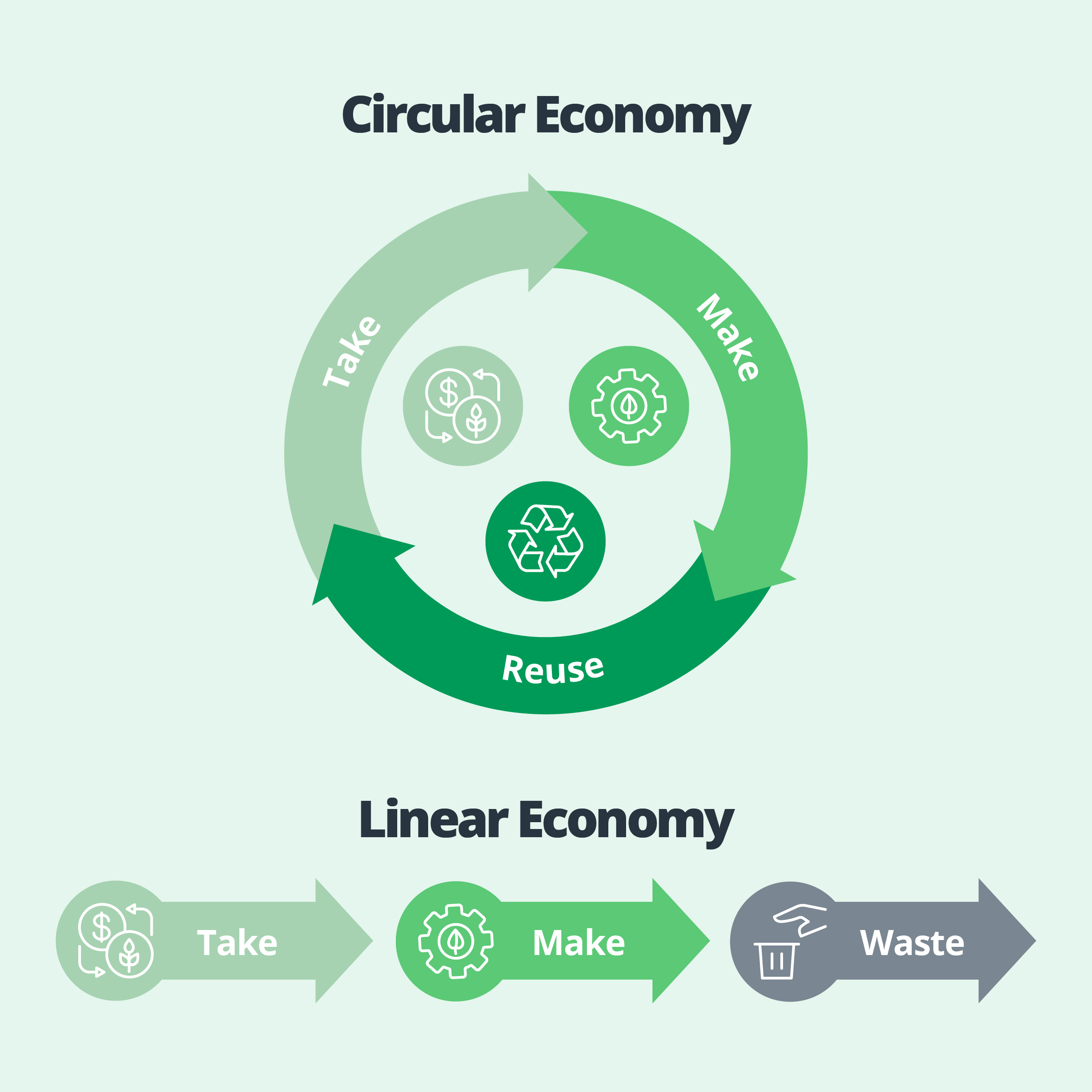 We exchange our dollars for widgets and baubles and fine-fitting fabrics within an economy that has rightly been referred to as the ‘take-make-waste’ model.

In this linear economy, raw materials are cut, mined, extracted then processed into a product that you love and use and then promptly toss out. On to the next thing! You could call this a cradle to grave system.

In a circular economy, raw materials enter a cycle wherein their value is maintained throughout its life cycle. When you are finished with something, it loops back up the chain to be reused in some fashion.

This has been called a cradle to cradle system, avoiding the grave by whatever means necessary.

When you are bored with those shoes, they can be passed on to someone else. When those shoes are worn into the ground, they can be dismantled into distinct parts for upcycling, recycling, or composting.

Where in a linear model, the value lies in the production and sale of lots and lots of products, a circular model values continuous cascades of material reuse as well as the functional benefits of the natural world (carbon capture, water filtration, etc). 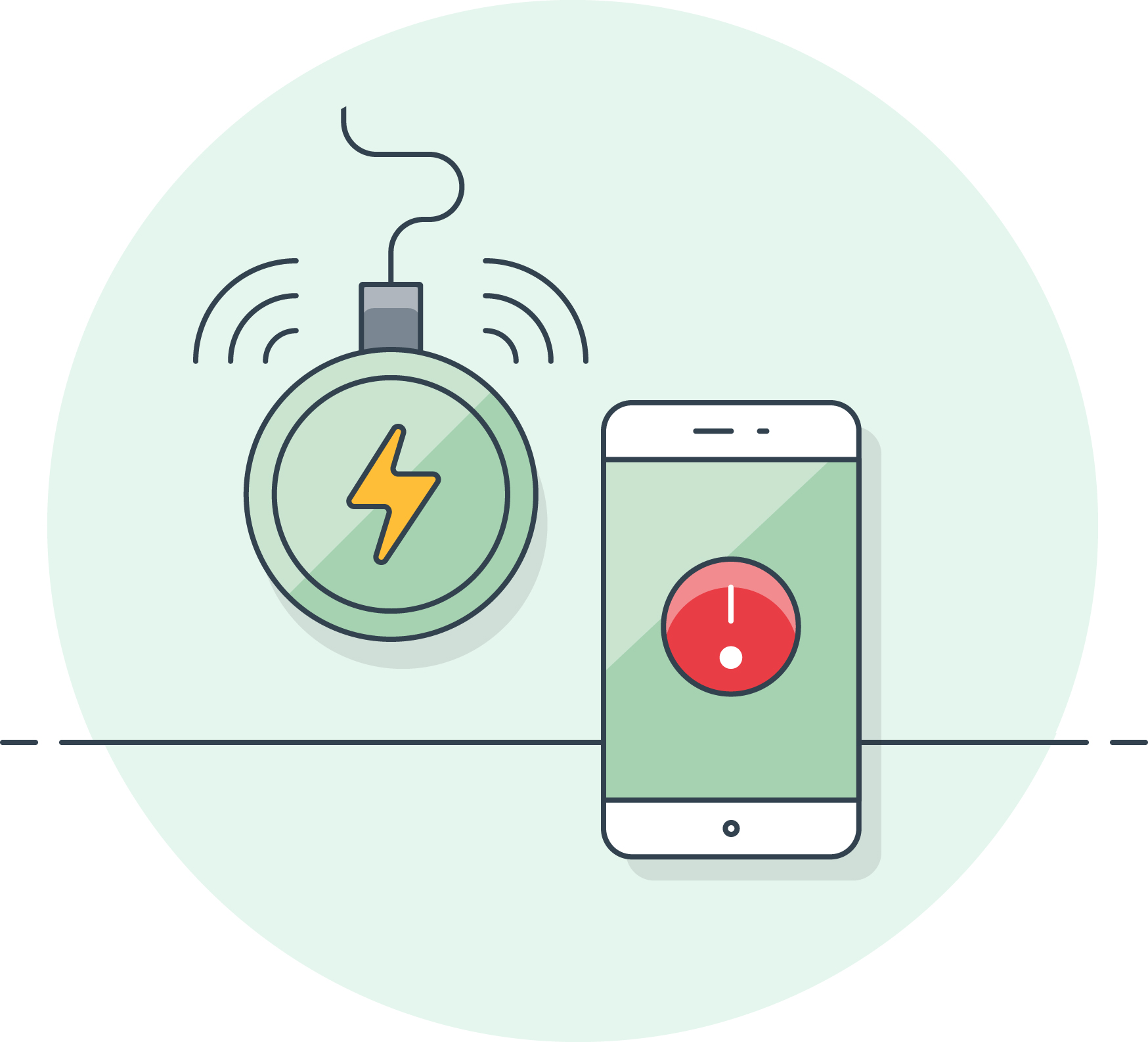 Part of a successful shift from linear to circular is a change in product models. Ownership of a product makes sense if it is consumable. A muffin is yours to consume.

But technical products cannot actually be consumed. We keep them for the service they provide us. A washing machine cleans our clothing. A car gets us from one place to another. So, what does it do for us—let alone the manufacturer—to own it?

Let’s look at a phone, for example.

You buy a new phone. You use it until it starts acting wonky or the screen breaks or your child deposits it helpfully in the toilet. Then you toss it out and buy another. No second chances, no repairs, no material recycling. Straight in the garbage.

In the circular economy, instead of buying a singular physical phone, you lease the use of the phone.

So, you’ve got a phone and it eventually starts acting weird or it becomes a crucial ingredient in one of your toddler’s experiments. Instead of throwing it away, you trade it in for another or they fix up your phone and send it back.

It is no longer an incentive to sell you more and more phones. Rather, providing great service is incentivized.

They can then take that phone in for repair, remanufacture, refurbishment, or recycling. They retain ownership of the materials and can reuse them continuously.

Everyone is happy and nothing is laying uselessly atop the landfill pile.

But it isn’t only applicable to tech products. The same model is being used with emerging fashion rental brands, like Armoire and Rent the Runway.


Key elements of the circular economy 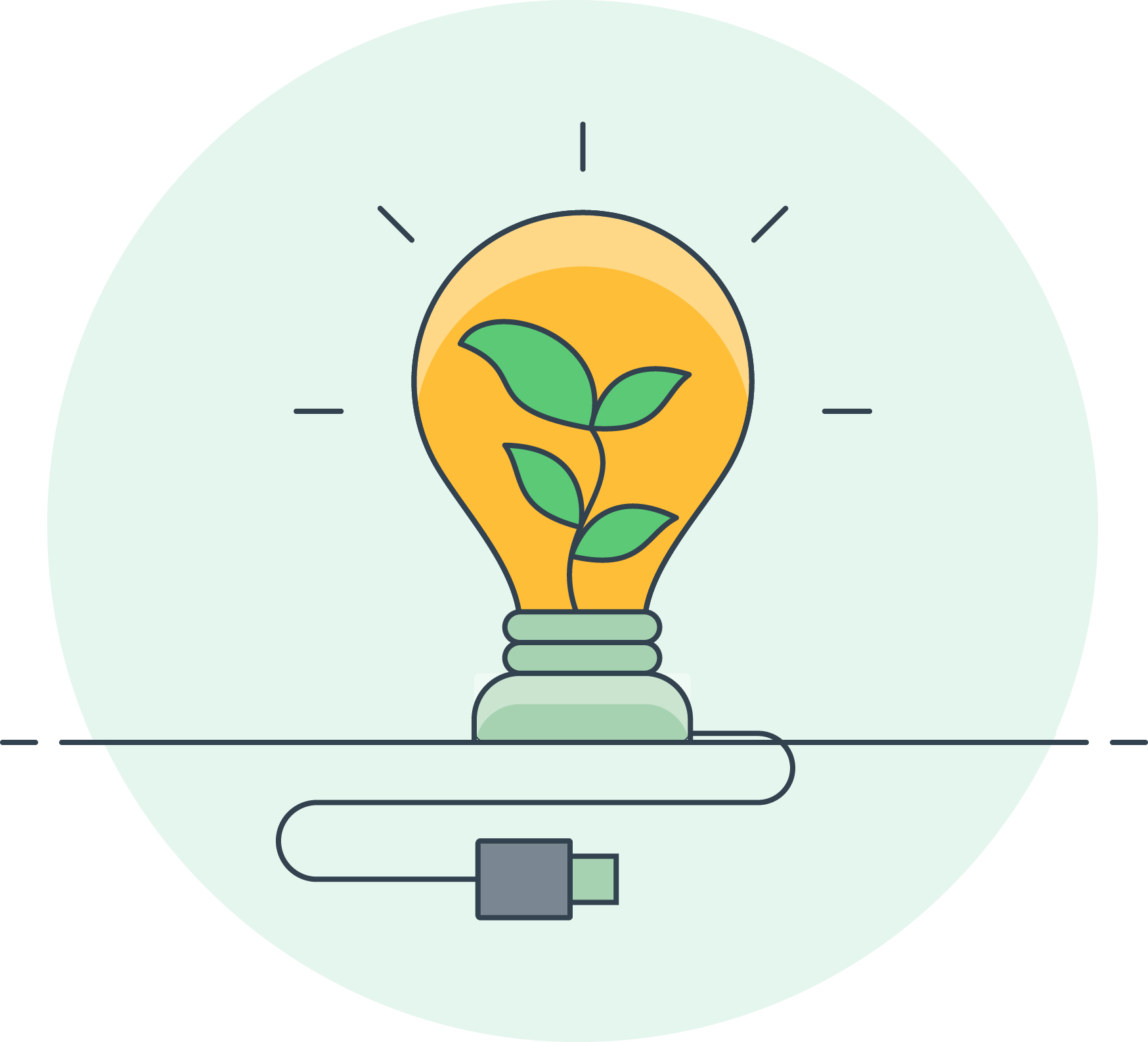 There are really three main principles within the circular economy: design waste and pollution out of the system, keep materials and resulting products in use, and regenerate natural systems.

These three principles are broad, encompassing a wider set of elements that can define the goals of the circular economy.

Design out waste with closed cycles

Waste in the circular economy is viewed much differently from waste in the linear economy. It becomes a resource instead of a landfill topping.

Oftentimes, the obstacle to waste becoming a resource is merely being in the wrong place for reuse. So, getting stuff from one place to another—shipping and logistics—is of the utmost importance for neatly lacing together disparate pieces of the circular economy.

There are two cycles—the organic and the technical. In the first, organic materials are cycled through the system as much as possible before eventual biodegradation, returning to the earth.

In the technical cycle, materials that cannot biodegrade are continuously cycled for as long as they retain value.

Through reuse, repair, remanufacture, refurbishment, and recycling, this technical waste becomes something new again, maintaining its value for as long as possible before it must be disposed of.

Instead of burning through limited natural resources, we’d move toward the regular use of renewable energy and resources.

The final goal would be to move to an entirely renewable-based system, removing the necessity of non-biodegradable raw materials and strategic reserves.

In the transition to that green future, the technical cycle works to extract as much value from the finite raw materials as possible. Cascading loops of reuse would replace the trashing of valuable resources.

Value expanded beyond the financial

Without a full redefinition of economic value, this circular system isn’t possible. Weighting the growth of capital over the degradation of biological systems creates incentives for doing bad business.

If the metrics for a good business model include the rippled effects they have on society and nature, the incentive is there to be a responsibly run business.

Support for and preservation of human and animal systems

A successful business doesn’t have to mean adverse environmental effects or the crippling of communities. With changing success metrics that include benefits to natural and societal systems, the economy that works is the one that not only causes no ill effects but contributes to those systems.

With a reduced reliance on finite raw materials, supply chains could become less volatile and more predictable. With the emergence of the circular economy, manufacturing centers would be decentralized, shrinking shipping footprints and making systemic shocks more absorbable.

Many businesses are taking the lead on the circular economy, examples for other companies to follow into the future.

The Ellen MacArthur Foundation has created an expansive framework for the circular economy over the last decade, arguing for not only the environmental benefit but the economic opportunity it represents.

In the video below, they illustrate what the circular economy can look like in practice.

A few companies leading the way

Paper Bottle Company (or Paboco) is developing paper bottles, made with sustainably sourced wood fibers, in partnership with brands like Carlsberg, L’Oreal, and Coca-Cola. The goal is to create a bottle that is completely bio-based and biodegradable. This is still in the prototype phase.

by Humankind is working to reduce single-use plastic waste with their personal care product line, which helps accomplish this by use of biodegradable and recyclable post-consumer paper packaging, water-free products (mouthwash tablets, bar shampoos and conditioners), and refillable products (like deodorants and hand sanitizers). Plus, they are carbon neutral!

Enerkem took a page from the Back to the Future script with their trash to energy technology. They take non-recyclable and non-compostable solid waste and chemically recycles the carbon within to make biofuels. They are literally in the business of harvesting trash!

Bionic Yarn, started by Pharrell, develops yarn and fabric from recycled plastic bottles for use in canvas, denim, and more. They partnered with G-Star Raw to create denim jeans from plastics pulled out of the ocean.

The circular business model can vary from industry to industry. Toad&Co explains it well for the clothing industry.

One of Sendle’s co-founders, James Chin Moody, actually wrote an entire book (The Sixth Wave) on the subject. The central theme being that the next big wave of innovation (the sixth one, if you were counting) will be about moving away from our dependence on resources and the wanton creation of waste.


The benefits of a circular economy 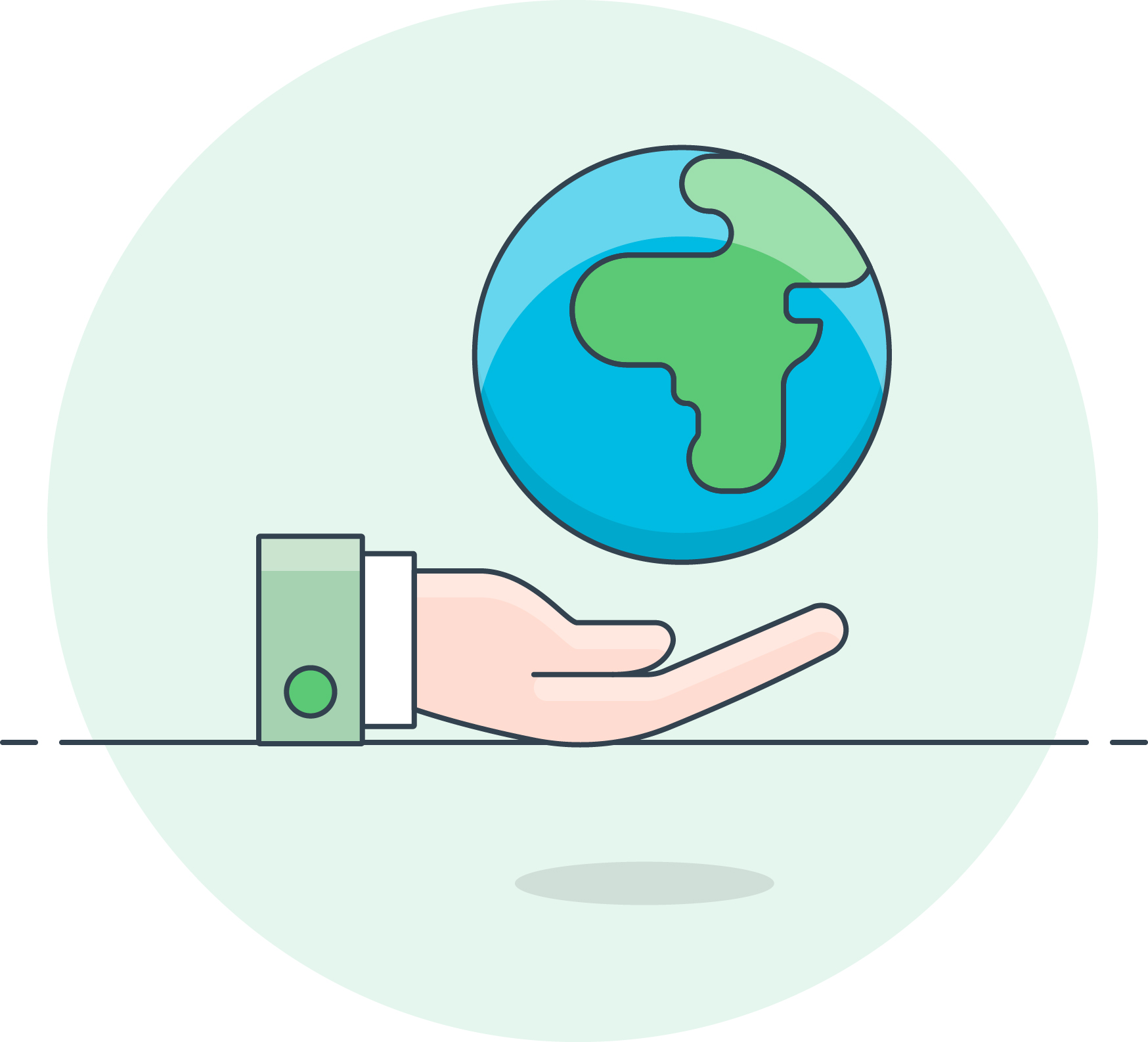 By moving from the ‘take-make-waste’ economy to the ‘make-use-return’ economy, many benefits can be realized across the board. The impact of the circular economy would be enormous.

Well, education and innovation are what follows. This must happen on all levels—individuals, governments, companies.

As our current situation becomes increasingly unsustainable, governments will have to legislate changes to ensure we can continue existing. In response, industries will need to adapt or perish.

Companies that care, like B Corps, can be the leading edge by innovating toward our new economy.

As individuals, we will need to educate ourselves and demand the political changes required to achieve greater sustainability. And, of course, we can each make our own personal changes to reflect the change we want to see in the world.

The secret to tasty produce from your own garden? Composting at home.

Ever thought about composting at home? Not just saving up food and yard waste for the city council to collect, but creating your own natural, nutrient-rich fertilizer to keep ...
Read more
Packing & Shipping | 10 min read

Do customers really care if your packaging is sustainable?

Small business shippers across Australia were shocked by surprise charges from Australia Post. They’re signing a petition to demand an end to penalties for using sustainable ...
Read more
More stories