Puggles, twirling devils & the Frida Kahlo of birds? Worth protecting!

What looks like a cross between a boot brush and a sloth, can be held (gingerly) in two hands and has a name that, in Latin, means quick tongue? Nope, it’s not your brother-in-law. It’s the short-beaked echidna, and it’s just one of the incredible native creatures you help to protect by shipping with Sendle.

We often hear “Oh, you carbon offset all your deliveries – great! But what does that really mean?” Sendle is the first and only 100% carbon neutral shipping service out there. To achieve this, we use fuel efficient shipping methods and offset the remaining CO2 produced through conservation, regeneration, and community initiatives.

As a small business owner, by using Sendle, you minimize your carbon footprint and invest in Earth by preserving and regenerating natural ecosystems. We invest on your behalf every single time you ship a package. One of the reasons we champion planting trees and cleaning our oceans is because of the incredible flow on effect for our native flora and fauna. Regenerating, reclaiming and preserving land and sea means precious native wildlife will continue to thrive and exist for future generations. The teeny, tiny, baby boot cleaners of the future need a place to call home, too. The investment of each project protects that ecosystems’ native wildlife.

Read on to learn more about some of the animals who call the Darkwoods Forest, Tasmania Native Forest, Mount Sandy, and the Beidler Forest their home.

A carbon sink is any place that stores more carbon than it releases (think soil, the ocean, and plants). Forests full of plants are not only home to at-risk wildlife, they are vital places that store and sequester carbon from Earth’s atmosphere. The Darkwoods Forest Conservation project sustains and protects almost 55,000 hectares of some of the most diverse forests in British Columbia, including rare old-growth inland temperate rainforests.


The wildlife of the Darkwoods Forest Conservation: 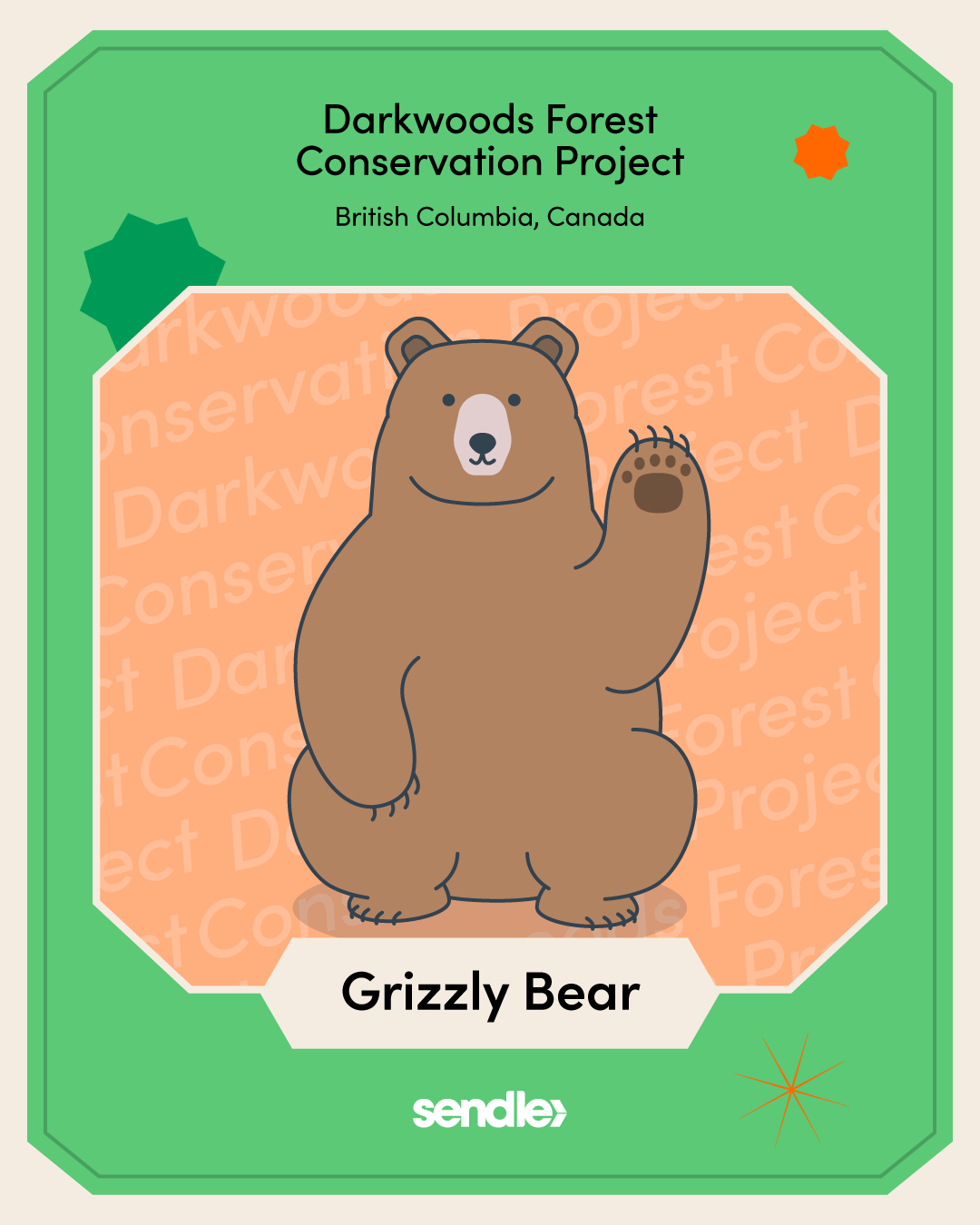 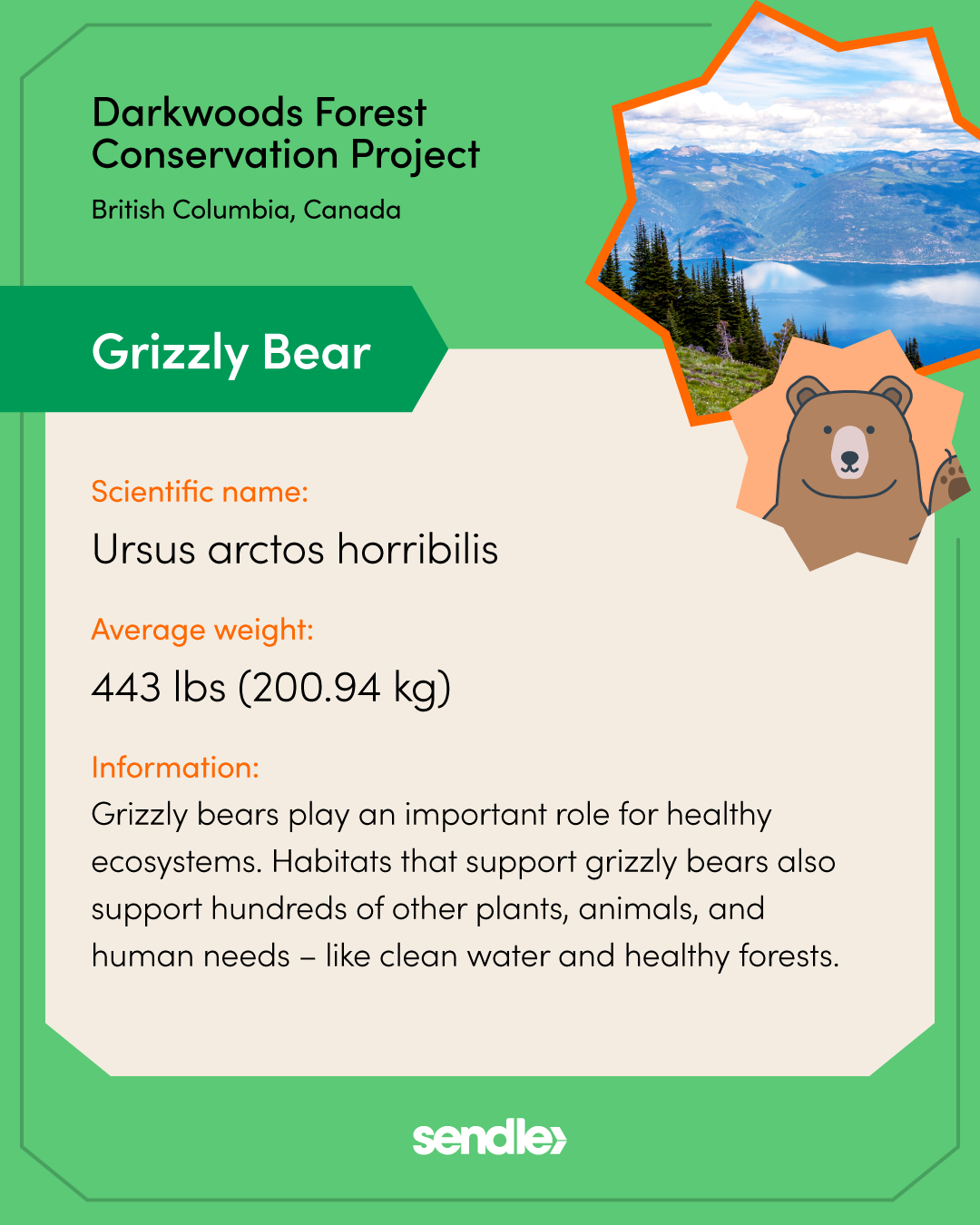 Meet the grizzly bear! At Sendle, we’ve got a special place in our hearts for the ‘ol grizzly. We even had a 10-ft tall statue of a bear and her cub made earlier this year for Earth Day. These fluffy bad boys might look cuddly, but they weigh an average of 443 lbs (200.94 kg). Habitats that support grizzly bears also support hundreds of other plants, animals, and human needs – like clean water and healthy forests.

In First Nation cultures throughout British Columbia and the Pacific Northwest, the grizzly bear, also known by its indigenous names: medi’ik and nan, are seen as teachers, guides, and symbols of strength and wisdom.

Fun fact: Grizzly bears like to rub their bodies on trees to scratch and to let other bears know who’s turf they’re on. 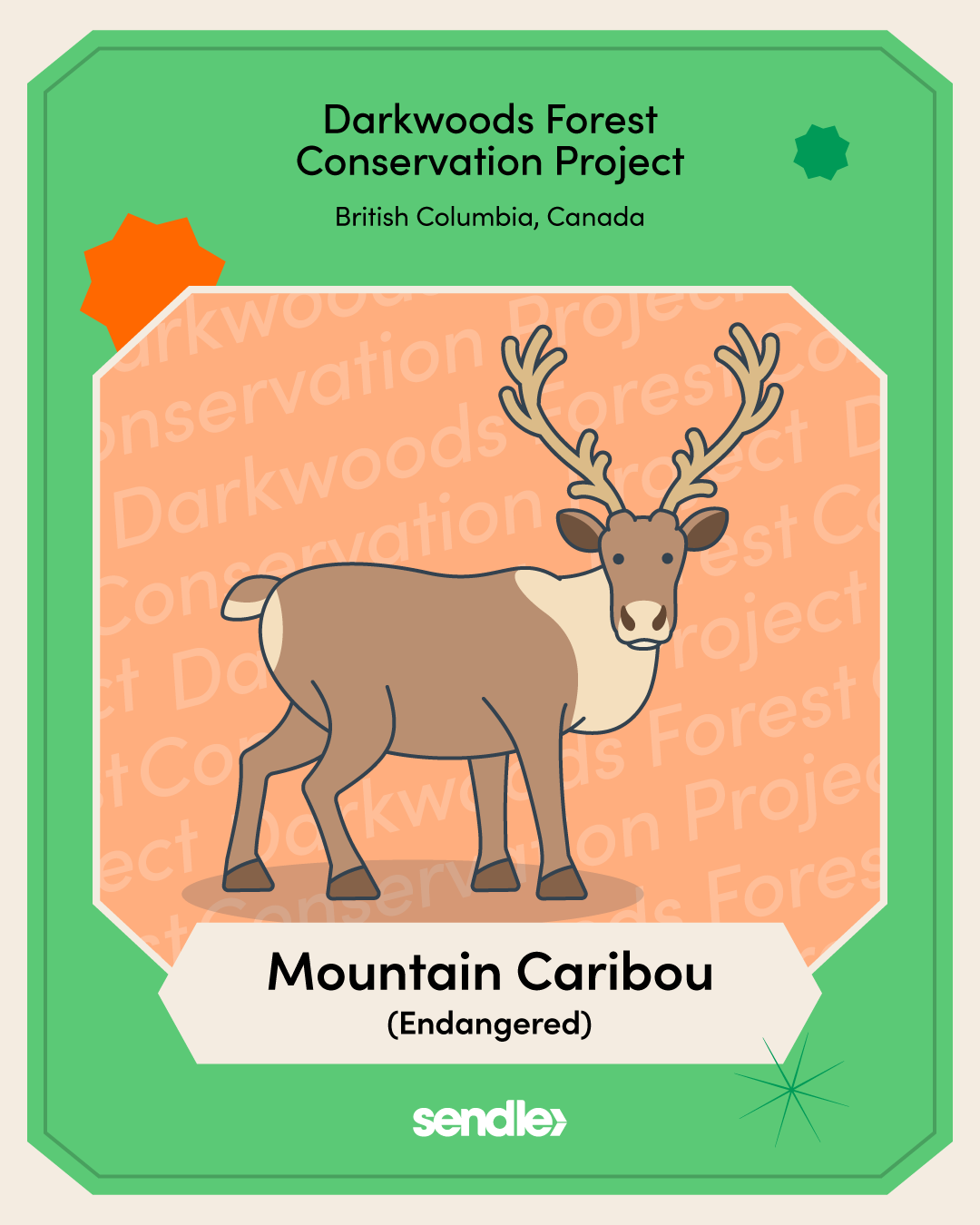 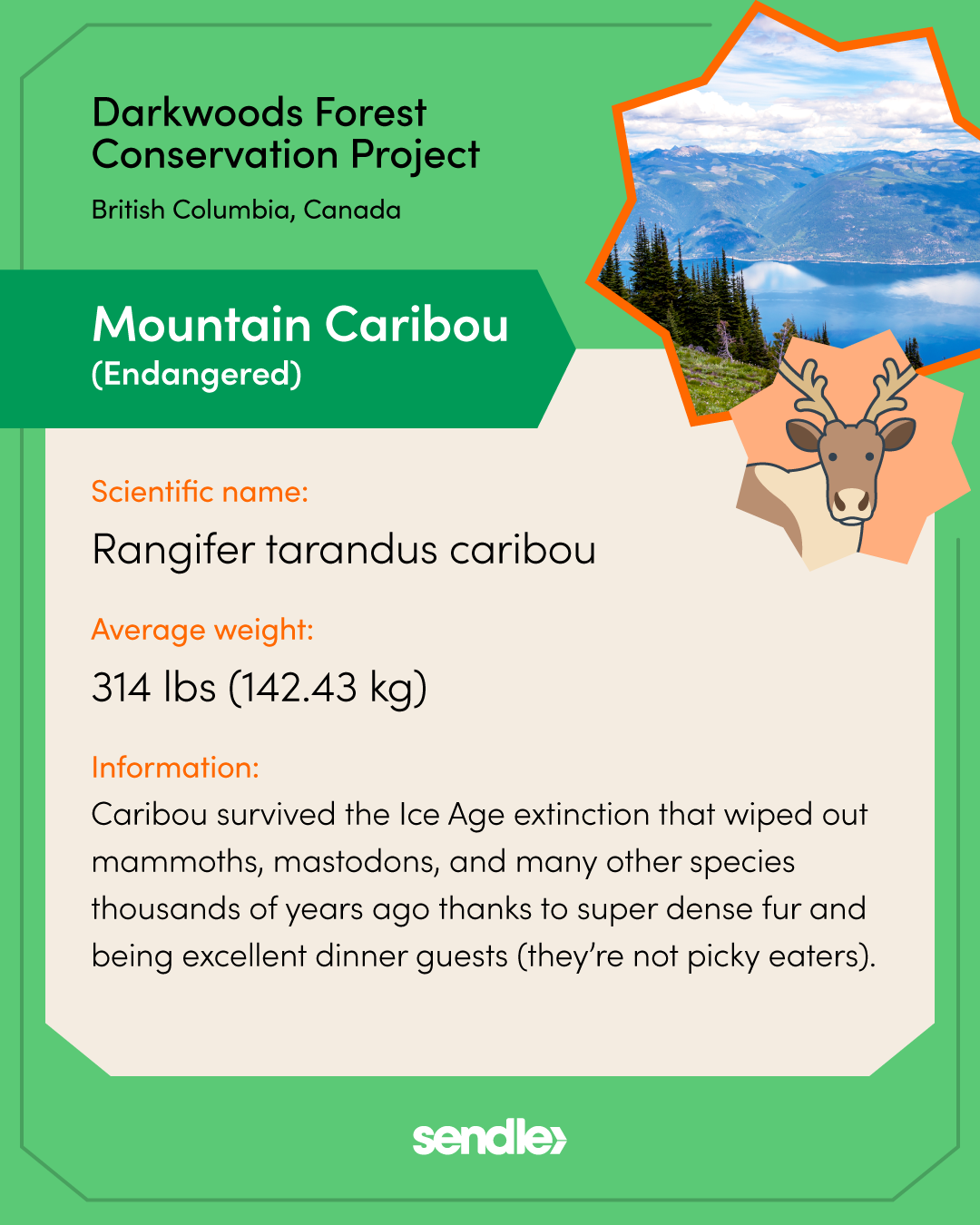 Meet the endangered mountain caribou! This subspecies of caribou resides in the mountains and forests of British Columbia and Alberta. The average mountain caribou weighs about 314 lbs (142.43 kg).

Only 13 herds of southern mountain caribou remain due to human development like industrial logging, oil and gas operations, etc.

Fun fact: Caribou survived the Ice Age extinction that wiped out mammoths, mastodons, and many other species thousands of years ago thanks to super dense fur and being excellent dinner guests (they’re not picky eaters).

The Tasmania Native Forest Protection has been protecting pockets of native forests in Tasmania’s Central Highlands since 2009. By stopping logging and land degradation, the project prevents stored carbon (in soil and plants) from being released. The vibrant forest creates economic opportunities for ecotourism, improves water quality, and protects wild species like the Tasmanian Wedge-Tailed Eagle, found nowhere else in the world.


The wildlife of the Tasmania Native Forest Protection: 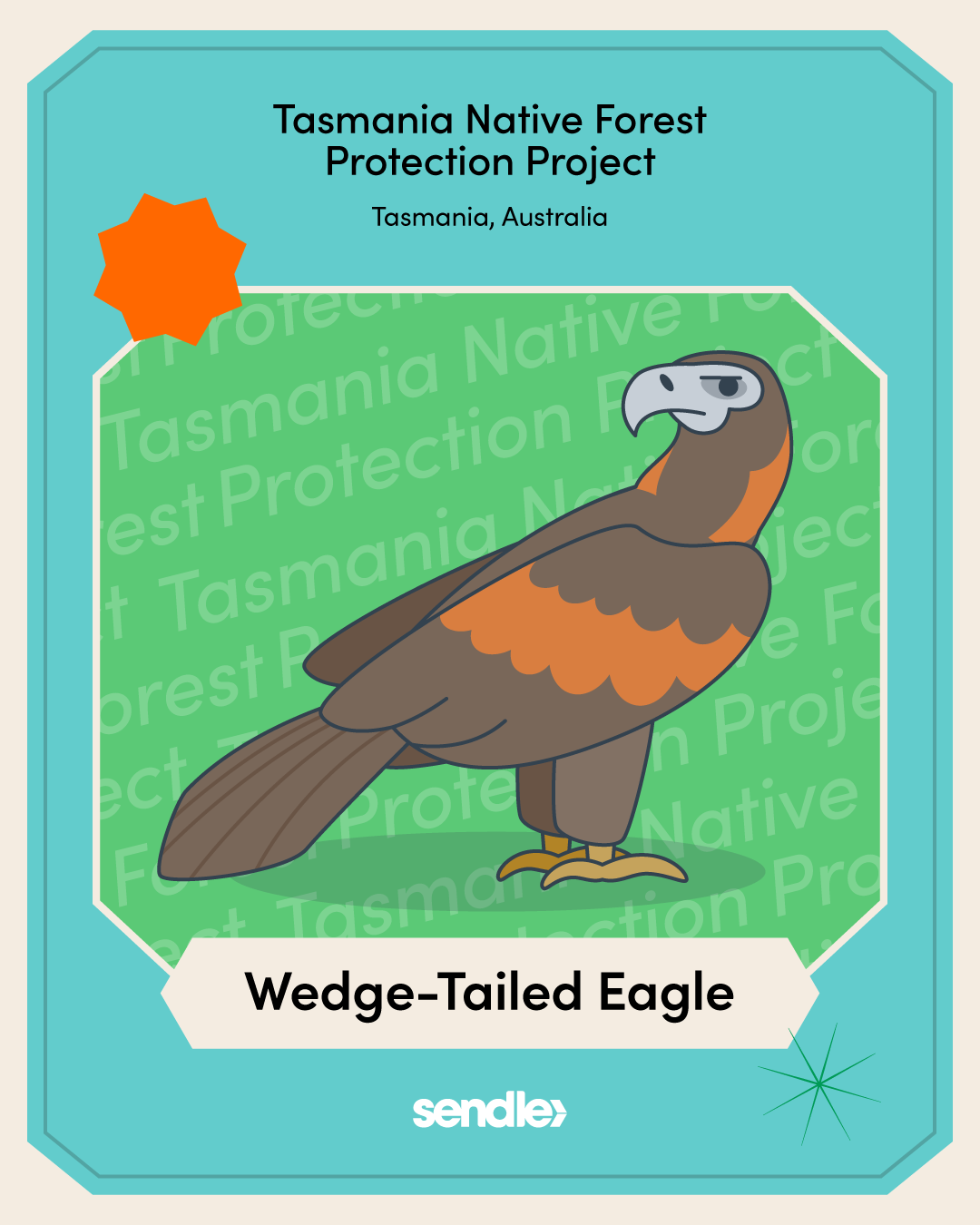 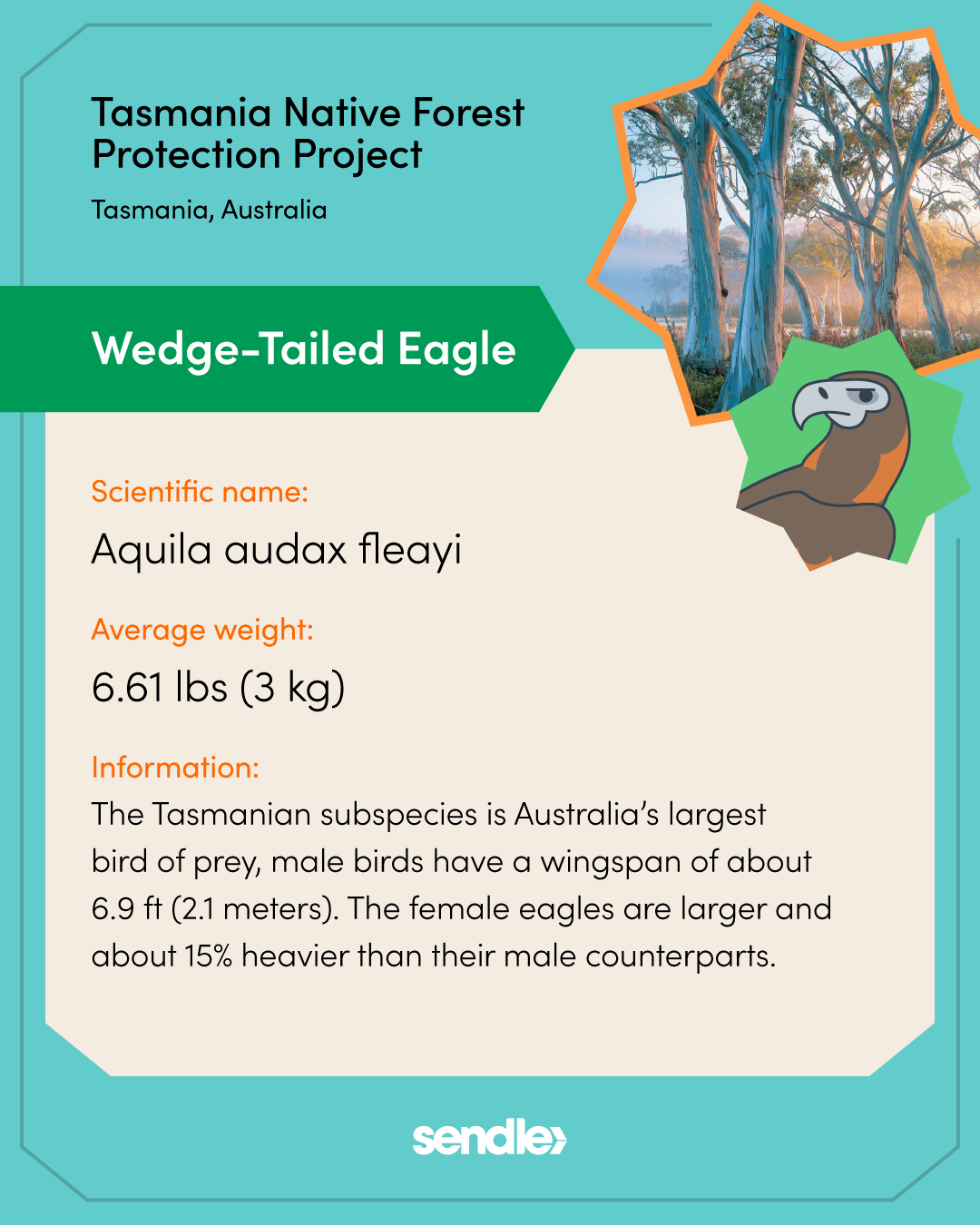 Meet the wedge-tailed eagle! The Tasmanian subspecies is Australia’s largest bird of prey. An adult male wedge-tailed eagle weighs 6.61 lbs (3 kg) with a wingspan of about 6.9 ft (2.1 meters). The female eagles are larger and about 15% heavier than their male counterparts.

The total adult population of the wedge-tailed eagle is estimated to be less than 1,000 birds. The main reason this eagle is considered a threatened species is due to threats to habitat, including: nest disturbance, collisions (vehicles, aircraft, etc.), and mistreatment.

Breeding birds are sensitive to disturbances and are likely to abandon their nest if something occurs nearby.

Fun fact: Wedge-tailed eagles mate for life! Once these birds have paired up, they share a very domestic life of caring for their chicks and maintaining their home (aka nest). 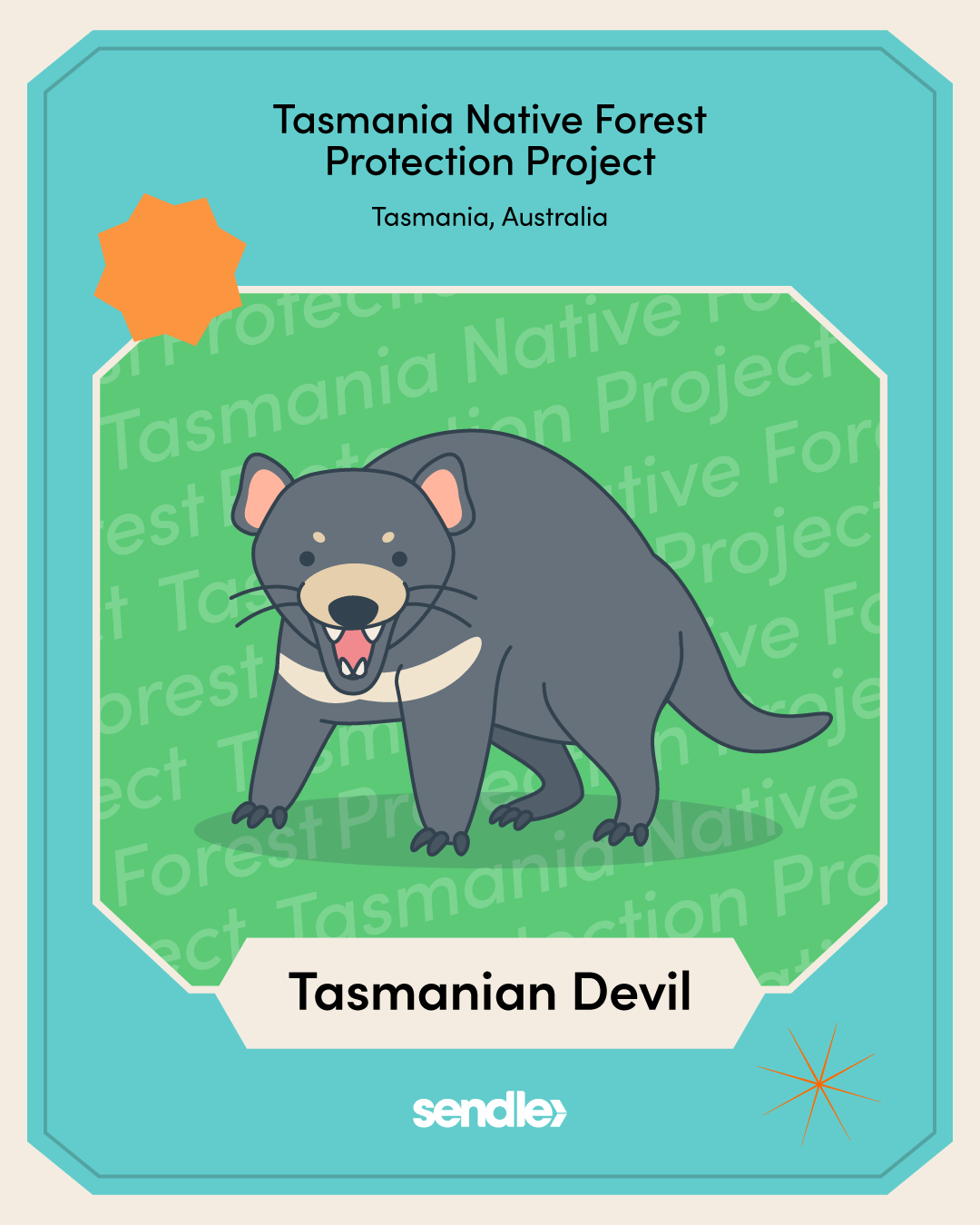 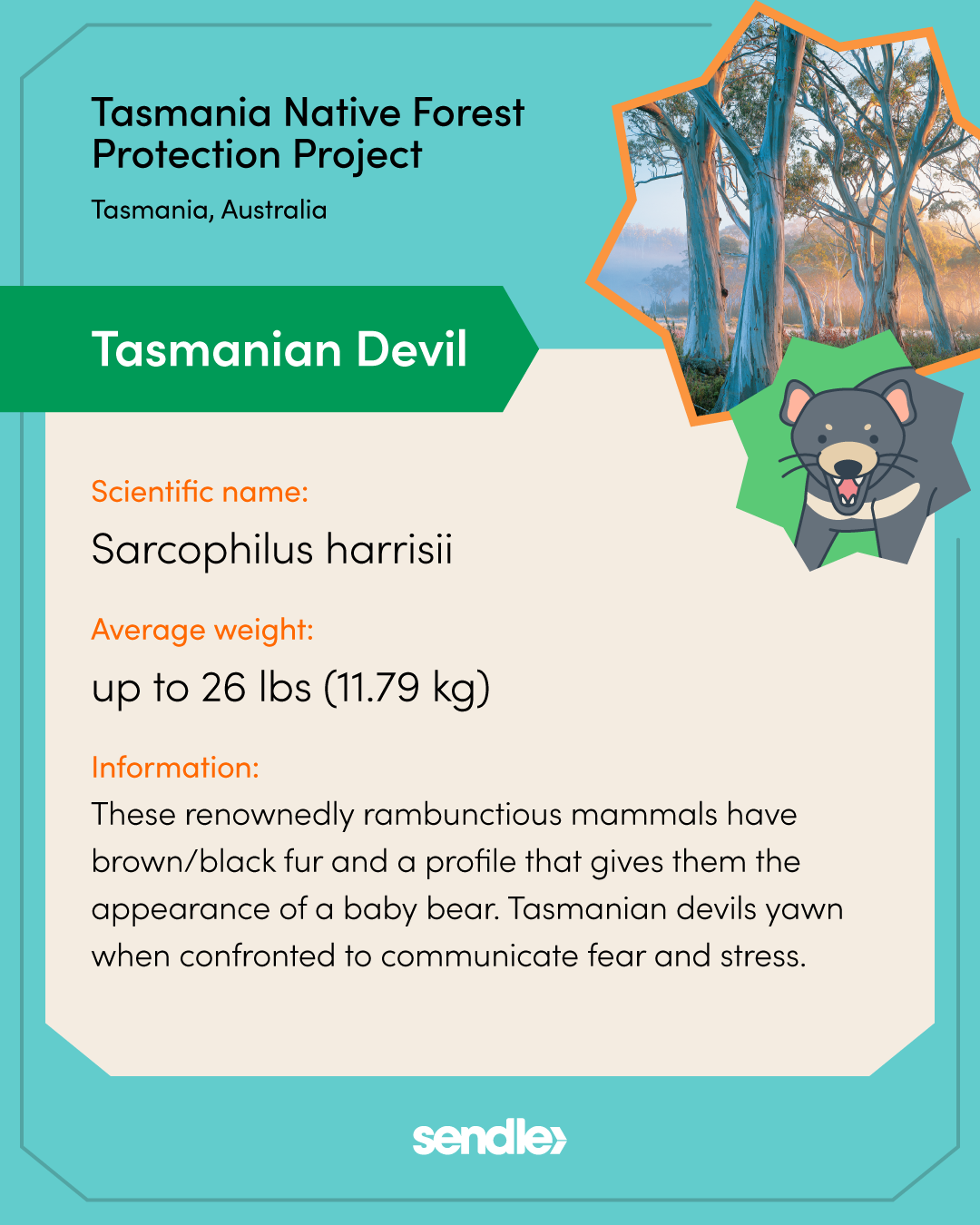 What would Tassie be without the Tasmanian devil? As the world’s largest carnivorous marsupial, the Tasmanian devil can reach up to 30 inches (762 mm) in length and weigh up to 26 lbs (11.79 kg). These renownedly rambunctious mammals have brown/black fur and a profile that gives them the appearance of a baby bear.

Though they used to be found all over Australia (3,000 years ago), you can now only find Tasmanian devils on the island of Tasmania.

Fun fact: Tasmanian devils yawn when confronted to communicate fear and stress. Incredibly, the cartoon got it right. They do actually spin in circles when threatened!

The Mount Sandy project permanently protects a rare pocket of wetlands and woodlands between the Coorong National Park and Lake Albert in partnership with its Traditional Owners, the Ngarrindjeri. As one of the last remaining areas of native vegetation in the region, the land forms a strategic corridor for wildlife, including the short-beaked echidna and elegant parrot.


The wildlife of the Mount Sandy Conservation: 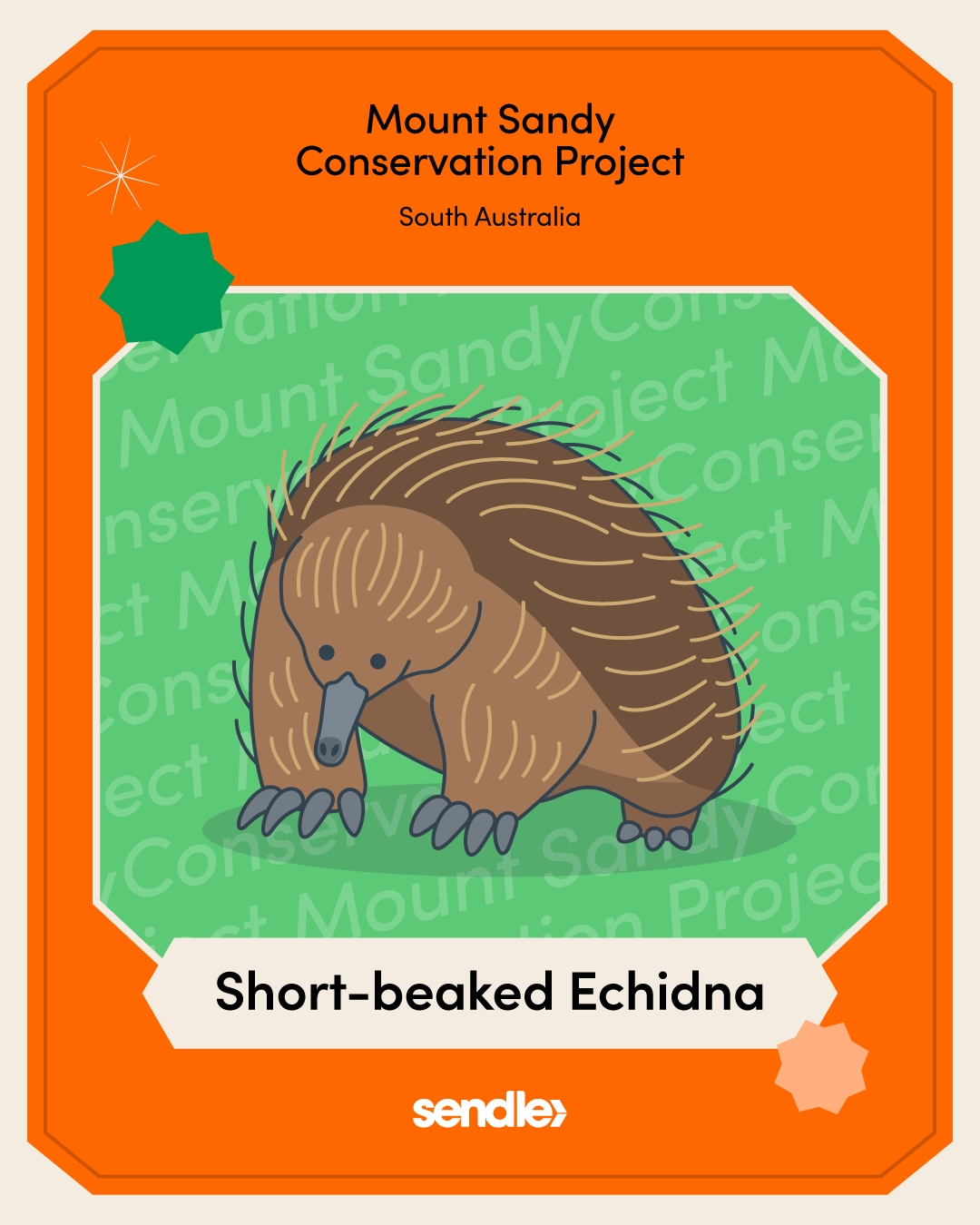 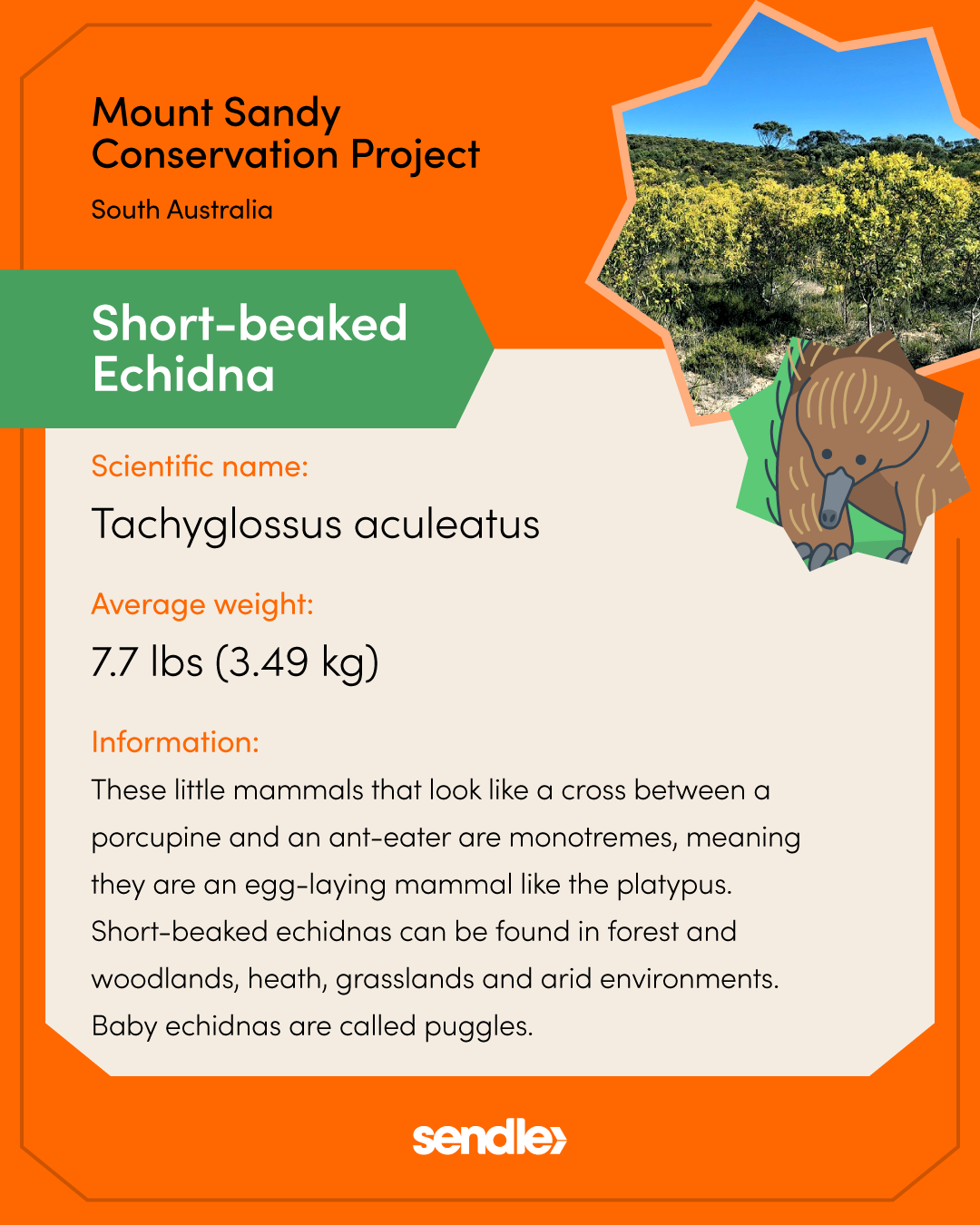 Meet the short-beak echidna! These little mammals that look like a cross between a porcupine and an ant-eater are monotremes, meaning they are an egg-laying mammal like the platypus. Short-beaked echidnas use their sticky tongues, which can be up to 17cm (170mm) long, to slurp up their food – ants and other insects.

These cute critters can be found in forest and woodlands, heath, grasslands and arid environments. The most common threats to echidnas are habitat destruction and motor vehicles. 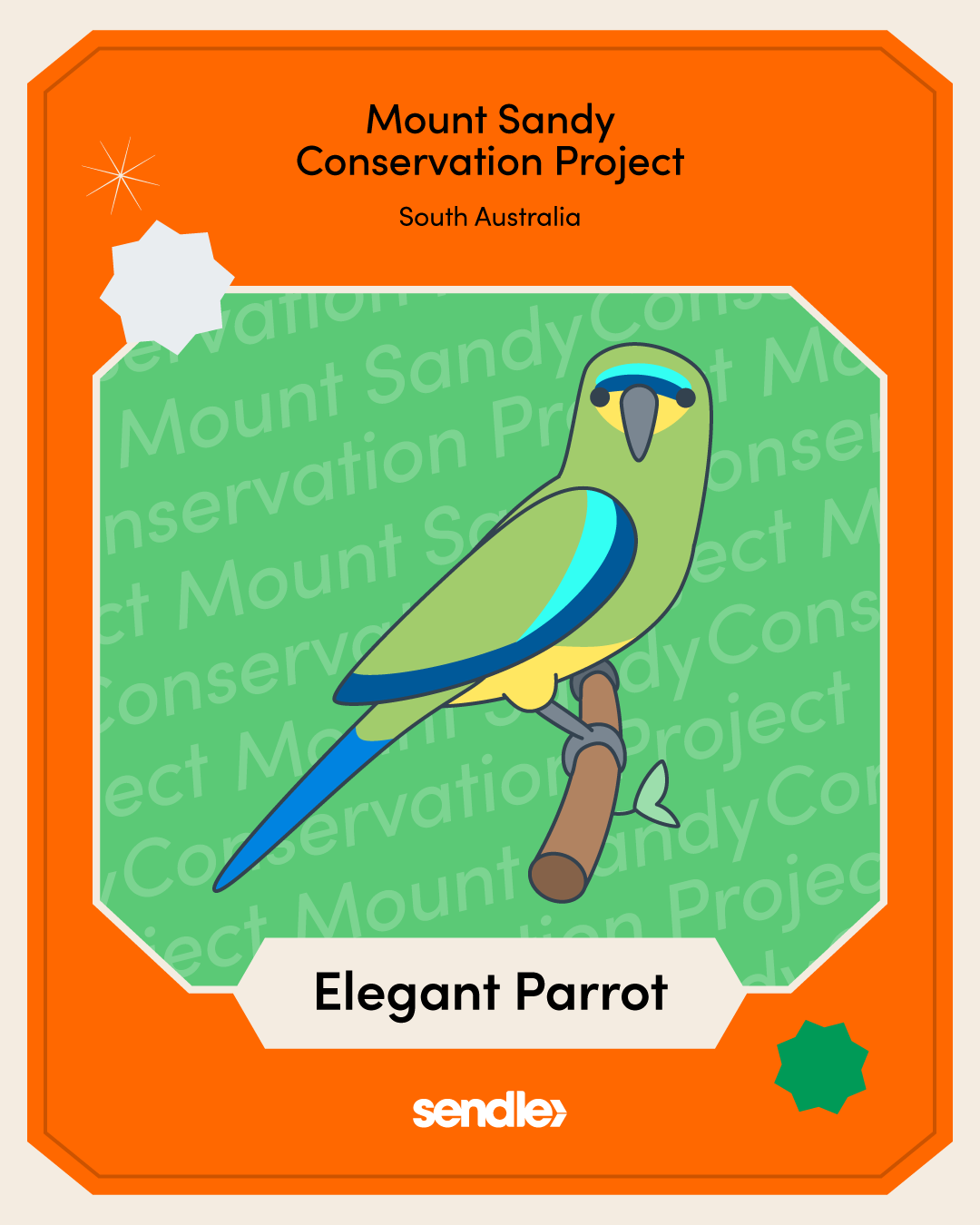 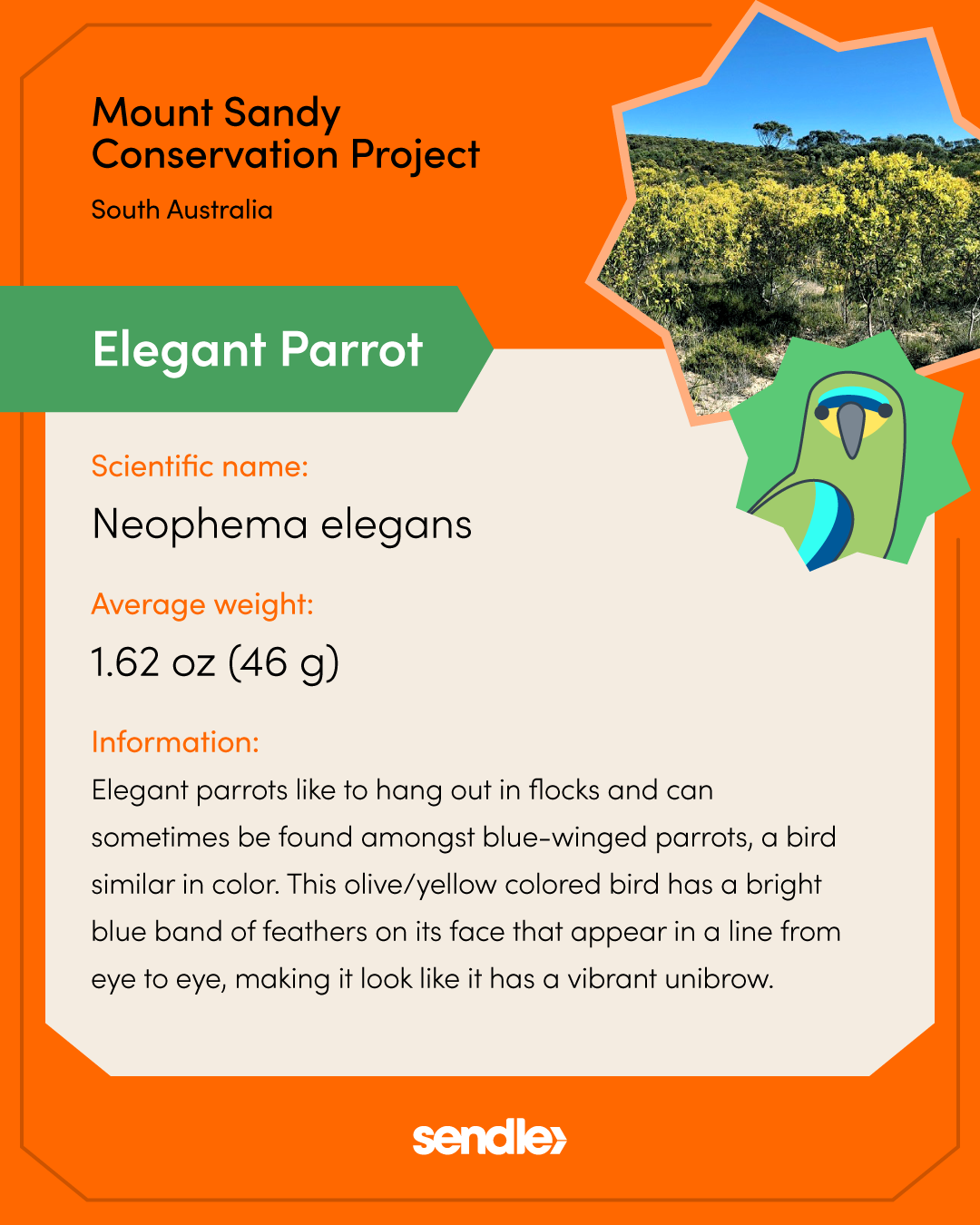 Meet the elegant parrot! These Australian parrots weigh an average of 1.62 oz (46 g) and are about 22 cm (220mm) in length. Elegant parrots like to hang out in flocks and can sometimes be found amongst blue-winged parrots, a bird similar in color, gabbing about what they’ll be doing on the weekend. The elegant parrot isn’t fussy when it comes to habitat. They’re happy to call grasslands, scrublands, woodlands, plains, salt marsh and farmlands home.

Fun fact: This olive/yellow colored bird has a bright blue band of feathers on its face that appear in a line from eye to eye, making it look like it has a vibrant unibrow.

Native trees including longleaf pine, red maple and water oak have been permanently conserved in this project owned and managed by the National Audubon Society in South Carolina. They’ve protected 5,500 acres where many birds, including the stunning eastern painted bunting, call home. These birds are just one species threatened by habitat loss in the region.


The wildlife of the Beidler Forest Conservation: 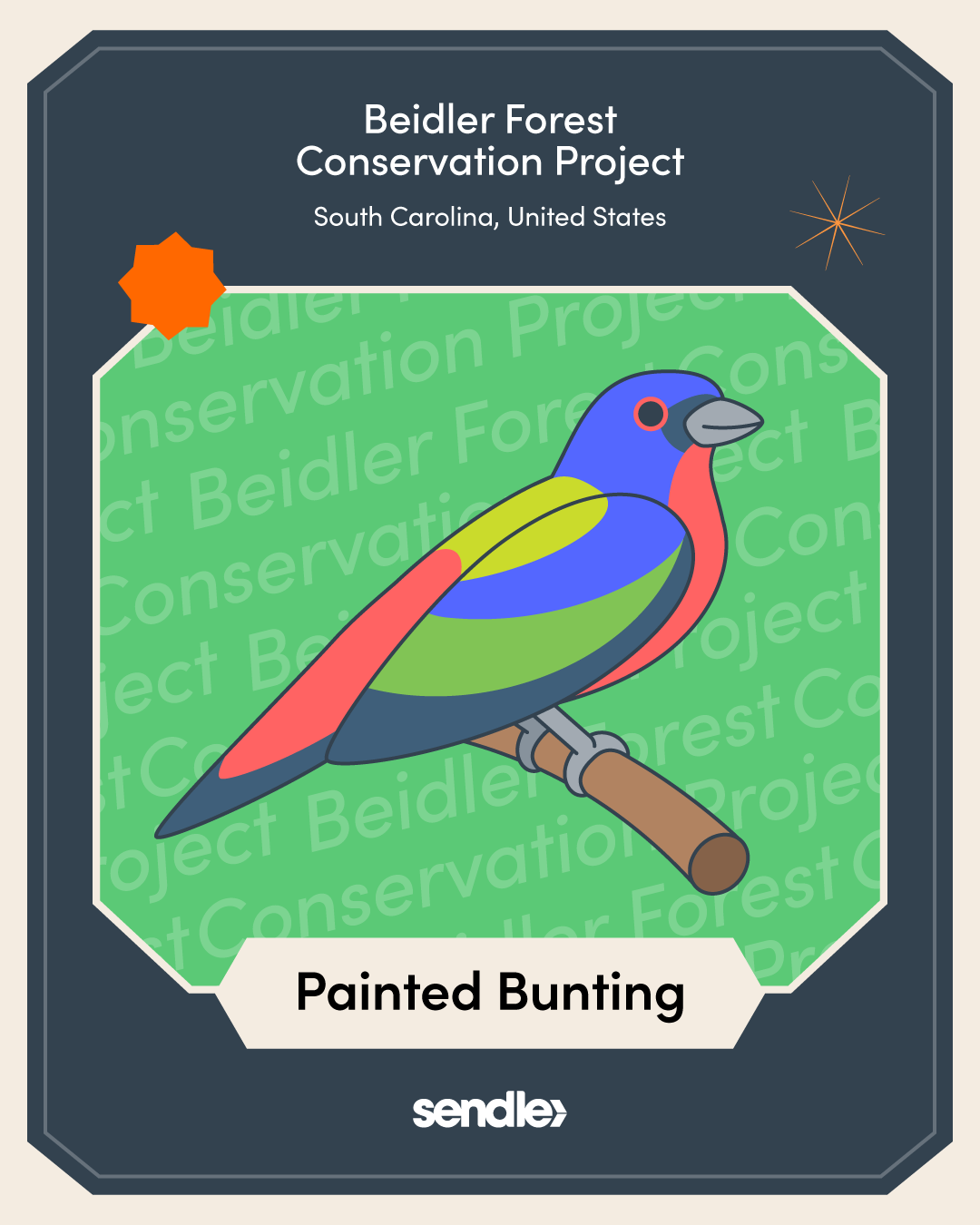 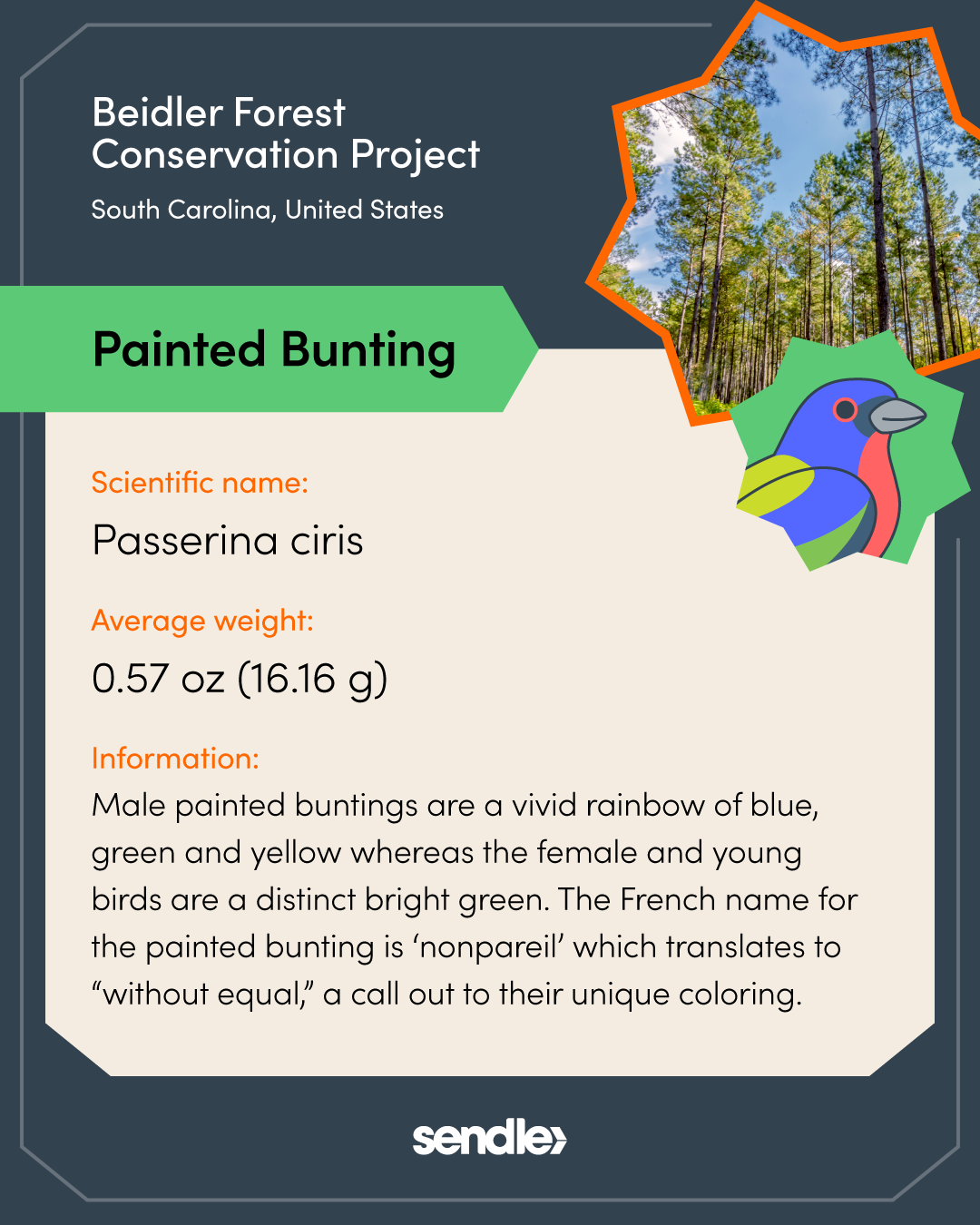 Meet the painted bunting! The male painted bunting looks like a children’s coloring book brought to life with their vibrant blend of blue, green, yellow, and red, while the female and juvenile birds are a distinctive bright green. Most painted buntings can be found in the coastal southeast and south-central parts of the United States.

We love a good birdsong, take a listen to this tweety sweetie:

Fun fact: the French name for the painted bunting is ‘nonpareil’ which translates to “without equal,” a call out to their unique coloring.


Meet the prothonotary warbler! This bright yellow bird is larger than a chickadee but smaller than a song sparrow and is most often found in the swampy woodlands in the southeast of the United States. Instead of nesting out in the open like most birds, prothonotary warblers build their nests in standing dead trees with old woodpecker holes. 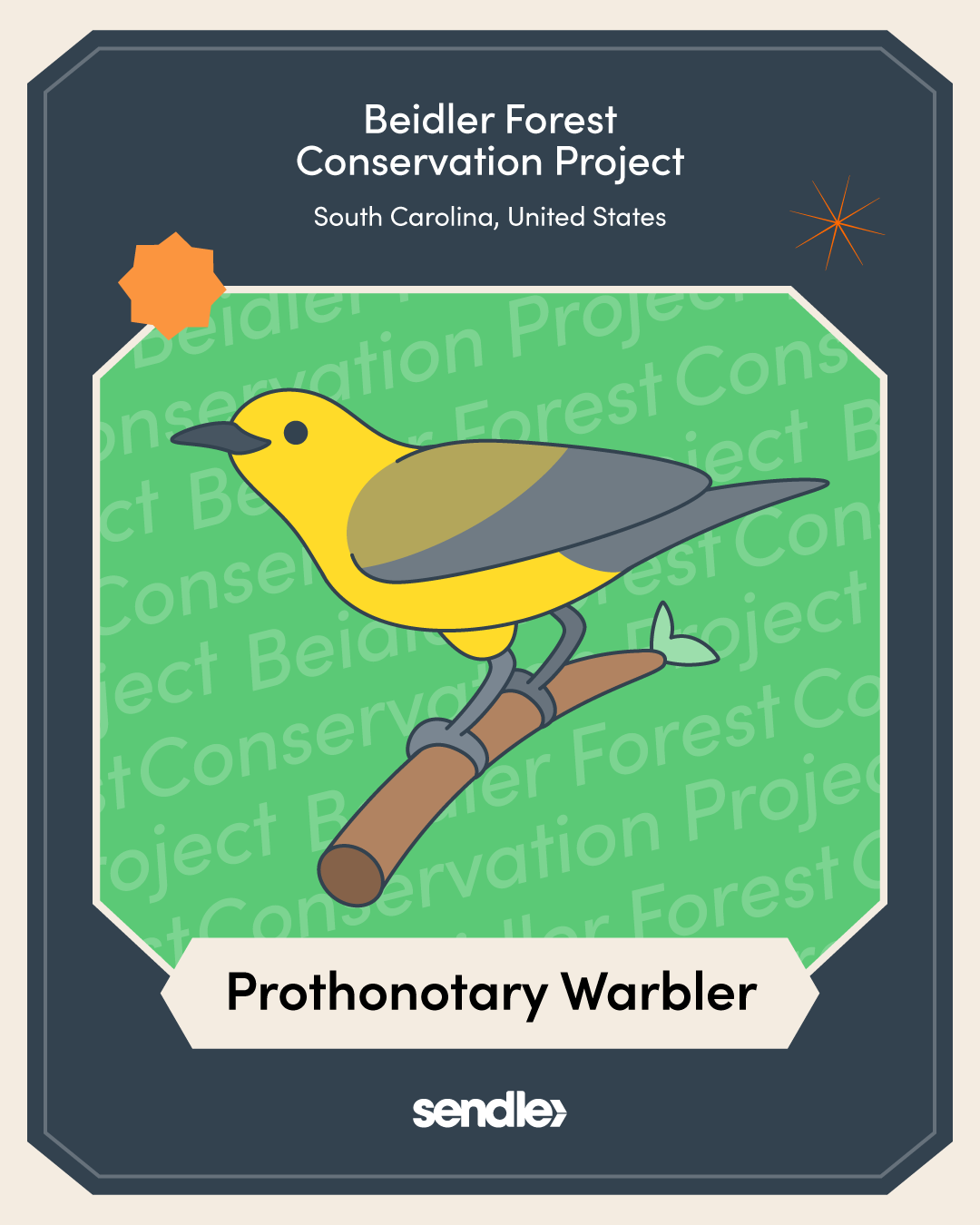 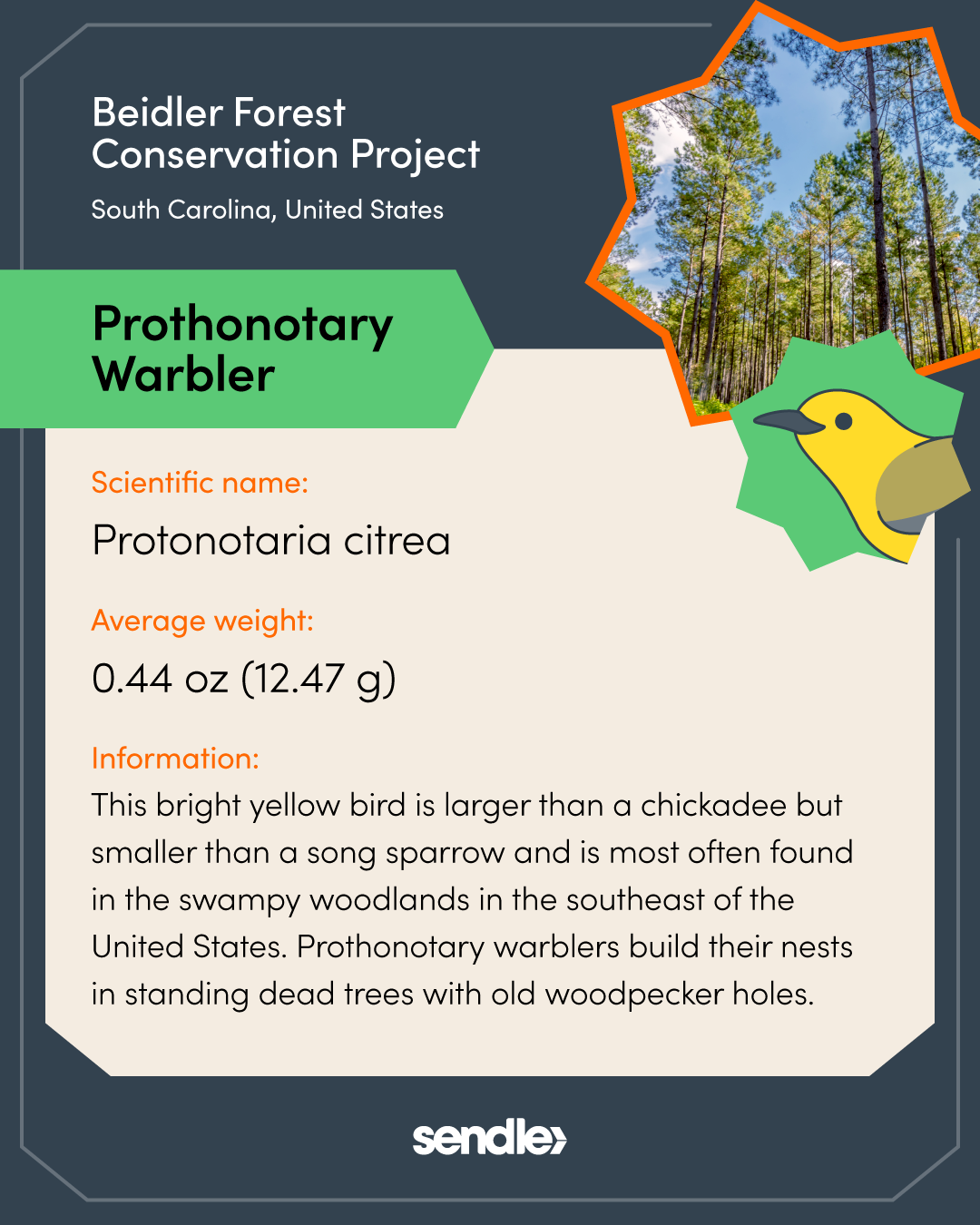 The prothonotary warbler’s population is declining, mostly due to loss of forested wetlands in the U.S. and mangroves where they migrate in the winter.

Fun fact: The prothonotary warbler got its name from the bright yellow robes worn by papal clerks, known as prothonotaries, in the Roman Catholic church.

Learn more about how shipping with Sendle is having a positive impact on the environment.

Thrifting’s the new gifting: secondhand buys for a conscious Christmas

Pre-owned, secondhand and vintage items have made a comeback. Vintage clothing, rare in its one-of-a-kindness, paves the way for self expression and individuality. Pre-owned ...
Read more
Customer Stories | 8 min read